2015 is all over and done with, which means we’ve had a full 12 months of new tech products to pine for, play with and pass judgement on. While some aspects of consumer technology become routine and fairly predictable: another new iPhone, another version of Android and so on. What really caught our attention this year was the more experimental the forward –looking technology that captures the imagination. Among the many, many gadgets, apps and services released this year, we’ve definitely had some favourites over the year, here are some of our top picks.

Apple Pay is effectively a digital wallet, letting users use their credit or debit cards through Apple’s Passport app. Apple once again contains users within the Apple sphere, extending the possible uses of smartphones once more. Obviously, upon release there were initial safety fears, however unlike contactless cards, Apple Pay includes an extra security measure known as tokenisation, which ensures that the card details stored on a phone are never passed to the retailer. Instead, the payee receives a single-use “token” allowing them to debit the payment only once.

The $5 tiny computer made by Raspberry Pi completely sold out, less than 24 hours after it was released. The little board – which packs in the same power as some laptops were soon selling on eBay for as much as £50. Earlier Raspberry Pi computers sold for around $20- $25. But the company said they wished to release a cheaper alternative – which still packs in 512MB of Ram, a 1GHz processor and all the sockets that users are likely to need. “You’d think we’d be used to it by now, but we’re always amazed by the level of interest in new Raspberry Pi products,” Eben Upton, founder of the Raspberry Pi Foundation, told WIRED. The $5 computer was given away with copies of The MagPi 40 magazine whose website stated “we printed more copies of The MagPi 40 than usual and, of course, everyone and their dog AND their dog’s puppies wanted a copy.”

The Echo is a cylindrical Bluetooth speaker that listens when you talk to it. This alone makes it ideal for anyone who simply enjoys making noise or bossing around inanimate objects. The Echo isn’t cheap it’s currently priced at $179.99 so it’s definitely an investment piece of technology. The most obvious use for the Echo is as a listening station, frankly, if that was all you ever used it for, that would be enough. Echo lacks the wallop of a premium sound machine but it’s more capable than you might expect. What makes the Echo a stand out product of is the use of voice control, you can be as vague as “Alexa play some music!” (Echo commands are triggered by the word “Alexa”) or “Alexa, play something for kids” and the Echo will obediently respond. Echo’s capabilities, however, go further than simply playing music, you can use Echo to create a to-do list, as a smart home hub and to create (surprise!) shopping lists, Amazon Prime members can even order eligible items (Alexa, buy some toothpaste”). Echo can even link with you Goggle calendar; just ask what events are coming up. Amazon Echo is versatile, it’s original and it’s useful, the only thing it’s not is cheap… 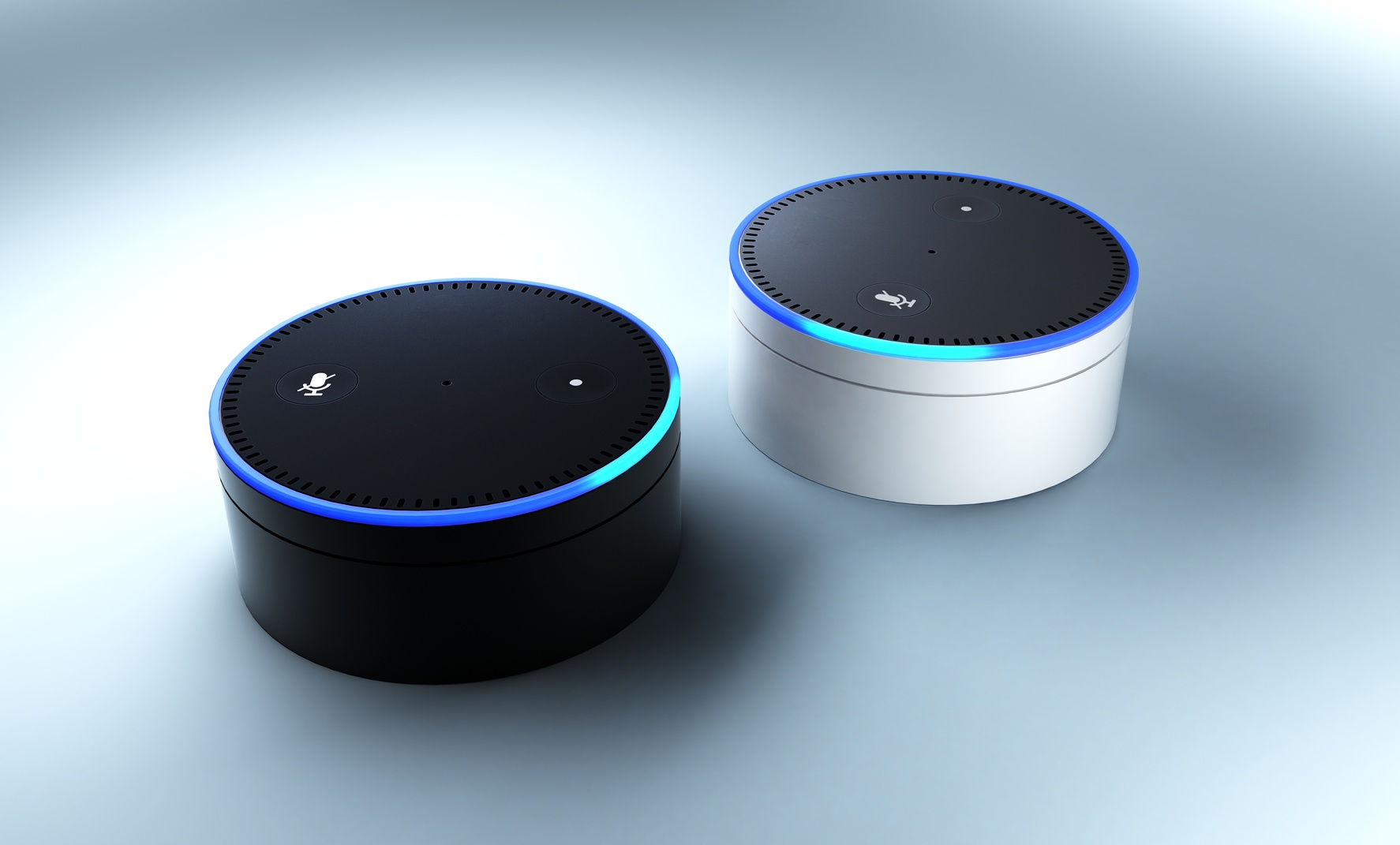 From Amazon’s pricey Echo to a product that’s made it on the list on the basis of its affordability. Currently priced at £49.99. After their initial release two years ago, Amazon’s Fire tablets have become some of the most popular on the market. With a 7” IPS display and a fast 1.3GHz quad-core processor and rear and front facing camera, the Kindle Fire gets you a lot for your money. If you still think of Amazon Kindles as those little monochrome holiday companions, then you should know that the Amazon Kindle Fire tablets are completely different beasts. Rather than singularly focusing on the specific job of downloading and reading electronic books, it is an all-purpose tablet that act as windows into Amazon’s wider multimedia world.

Roku 4 offers advanced processing for smooth streaming at higher resolutions, plus unique new features such as a lost remote finder (always useful) and voice search. It delivers an award – winning interface and high –quality upscaling for HD content. The Roku 4 has big shoes to fill, it’s taken two years for the latest model to come out – the Roku 3, was dubbed the “gold standard in steaming,” came out in 2013 – but the end product has justified the wait. Roku 4 is faster, more well – rounded and more open than any product that company has released before, borrowing from its predecessor and adding more to its legacy in equal measure.

After years of crowdfunding campaigns and months of production delays, the first company promising truly wireless earbuds has finally shipped a product to its backers. There are no longer the need for wires that tangle or yank your phone off your desk or out of your hand. There’s no cord that’s so long that you have to ball it up and stuff it in your pocket, or buy an entirely new accessory just to maintain. Instead, you’re left with two small bits of plastic and metal that slip into (and more importantly, stay in) your ears, objects that conjure music from your phone like some sort of magic trick. Whilst there have been a few teething problems, with reviewers claiming it’s obvious that the Earbuds have been designed and developed by and inexperienced start-up, the company deserves some credit for delivering to backers instead of hemming and hawing its way into 2016.

Initially, you could easily mistake the Pro 4 for the Pro 3, but on closer inspection there are some significant changes that make a big difference to the overall experience. Its thinner and has a larger screen without a bigger overall size thanks to thinner bezels. Microsoft said that it’s essentially as thin as it can get without being forced to get rid of the USB port – and we would have been pretty disappointed if the firm had chosen thinness over the USB. The new model has a long list of updates; the keyboard is more spacious, the touchpad is larger, the display is both bigger and more pixel dense, the pen is more sensitive and the base hard drive offers twice the capacity as before. What Microsoft has achieved here is impressive, a huge amount of innovation has been displayed by Microsoft’s engineering team and Apple should be wary. The Surface Pro 4 is everything that is good about the new Microsoft – it has a wonderful foundation in design; it is fast, user-friendly, and accessible; and it feels like a device that can take the punishment of years of travelling.

Microsoft stated that Widows 10 is built from the ground up for a world in which mobile and cloud computing are key. Executives from the company said that it was committed to making Windows 10 friendly for the enterprise, ideal for keyboard and mouse users, but also optimised for touch. Given the lukewarm reaction to Windows 8, these seem like bold claims. This is probably why Windows 10 has become the most beta – tested product that it has ever released – Windows 10 was reportedly tested by over 4 million people around the world before its launch. Productivity is the key element of Windows 10 that sets it miles ahead of its predecessors – Windows 10 allows you to create multiple ‘desktops’ on a single screen to manage different projects, as well as split each screen into quadrants. The start menu is back, and for anyone with a mouse/keyboard/trackpad, the incredibly annoying full-screen mode the apps (and previous Start) employed in previous versions is now entirely optional. Another key feature is Cortana, Window’s digital assistant. One of Microsoft’s key investment areas in developing Windows 10 has been to create one codebase across all platforms- the apps should move seamlessly from your desktop to your tablet and to your phone. This is where Cortana comes in especially handy, as appointments or notes made on your PC will be automatically updated on your other Windows devices. 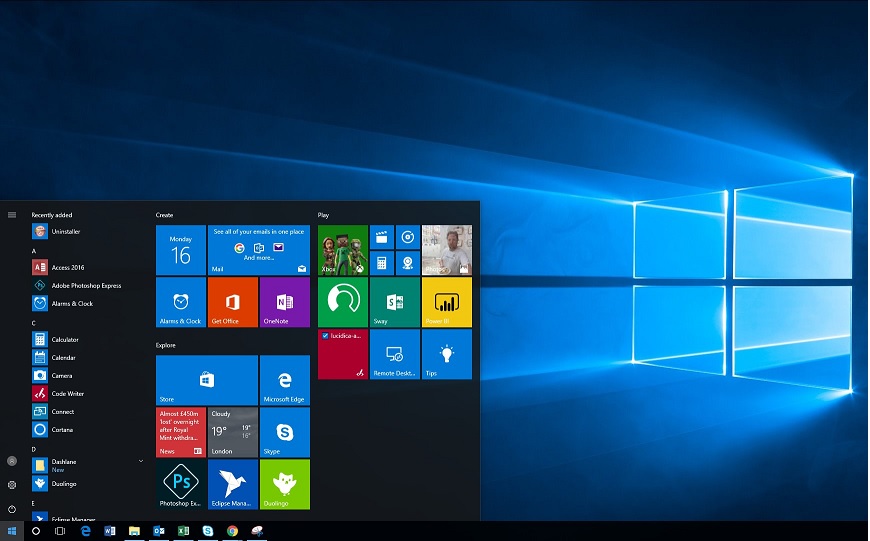