20 years ago Microsoft launched Windows 95. Its launch was met with more hype and expectation than any previous OS, but no one, not even Microsoft was to know how much of an impact it would have on our lives even two decades on.

For the first time, Microsoft’s new OS brought a swish graphical user interface (GUI) along with the much vaunted Start menu and a taskbar, two features that have become a staple in operating systems today.

In celebration of the success and influence Windows 95 brought to the computing world, we’re taking a look back at the OS that laid the ground work for all others and some of the moment from its history that defined the popular OS.

Windows 95 began its life codenamed ‘Chicago’. Microsoft’s plan from the outset was to create an OS that would leave the days of MS-DOS behind and welcome the new age of 32-bit glory. One of its initial versions, Build 56/58 still looked an awful look like Windows 3.1, however the seeds that would a few years later grow into Windows 95 were being sown. 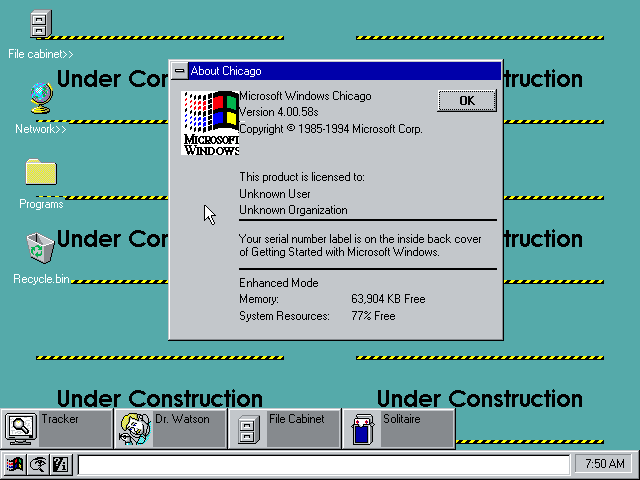 A big milestone was hit a little under a year before the OS was released to the public when Chicago was named Windows 95 for the first time. By now we were onto Build 189, the UI began to take on the grey hue and the Start menu has finally arrived. The next and final beta build brought in the clouds and flying Windows logo that are now synonymous with Windows 95. 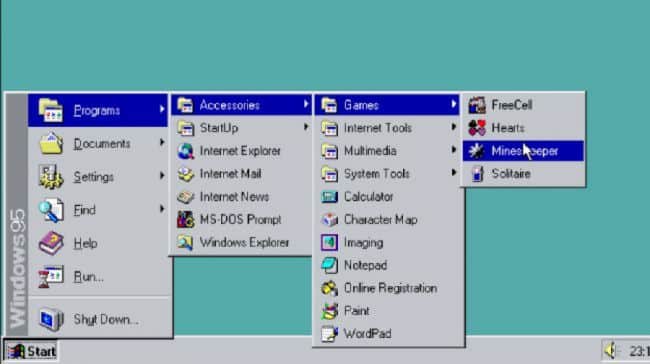 Microsoft held no bars in the marketing of its brand new OS. Its $300 million advertising campaign included a commercial featuring the Rolling Stones’ 1981 single ‘Start Me up’ – a reference to the new Start menu, – and a 30 minute promotional video with Jennifer Aniston and Matthew Perry showcasing the OS’s features. The success of which was to start a long line of celebrity-infused events that continues to this day. And not to let that $300 million budget go to waste, the Empire State building was lit to match the colours of the Windows logo and a 328ft banner hung from the top of the CN tower in Toronto.

The campaign knocked its competitors off the map. Windows 95 wasn’t the only OS on the market. IBM was selling a little platform called OS/2 that was arguably better. It was certainly more advanced than Windows, but nobody really cared. By the time Windows 95 arrived in stores, after its mega advertising campaign, consumers were primed and lining up for it.

In addition to beginning the era of the Start menu and the taskbar. 95 was also the OS that introduced the Recycle Bin. However, it did launch with one big omission – Internet Explorer. Windows 95 launched at the very cusp of the consumer Internet. We finally had graphical web browsers and awareness and demand for internet access was growing at preciously the moment that millions of people were bringing computers into their home for the very first time.

Microsoft did, however finally add it in another innovation we’ve now become very familiar with in subsequent versions of Windows – Service Packs. Keeping Windows 95 relevant was a tough task given the amount of investment that was going on around it. To make sure the OS wasn’t left behind, Microsoft needed a way to add to their OS. Along with IE, they added FAT32 support, DirectX, InfraRed, USB, and of course all the bug fixes that have to be allied to any OS.

Within long was established as a powerhouse in the OS market, and turned Microsoft into a brand name like General Mills and Ford. On its first day in stores it made $30 million and shifted 40 million units in its opening year – a figure unheard for its time.

But all good things must come to an end and in the shadow of Windows 98 and XP, Windows 95 was eventually retired on New Year’s Eve 2002, and all support withdrawn in true Microsoft style.

Finished, but not forgotten, Windows 95 innovation and influence has forever cemented it’s place in computing history and as we begin to familiarise ourselves with the new features in Windows 10, the legacy of Windows 95 can still be seen in the instrumental functions it introduced and we continue to use to this day.

Windows 10: Twelve of our Favourite Features and Tricks